WELCOME TO
GUESSCHESS.COM
The first portal where you can earn money by guessing the moves of the most brilliant minds in chess.
GuessChess.com is a platform where you will have the opportunity to make predictions in professional chess games, compete with other users, score points by guessing the moves, have a lot of fun and win prizes with it. What are you waiting for to get started?
How It Works
Next tournaments
See more
Start Date
End Date
Tournament
City
Type
Jan 15th
Jan 30th
Tata Steel
Wijk aan Zee 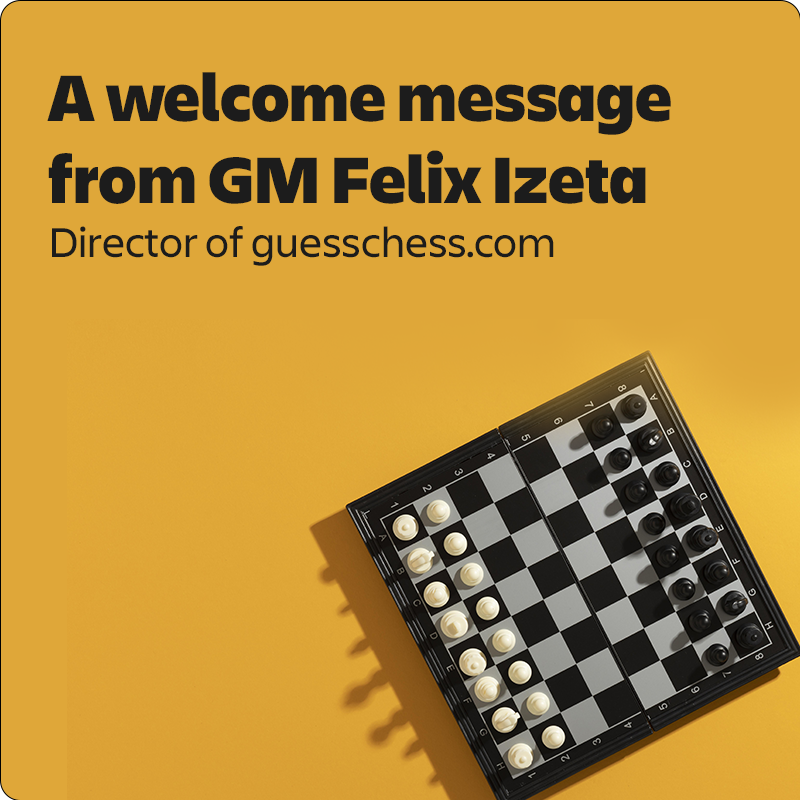 Play the Candidates at Guess Chess

The most anticipated tournament of the year is here and in Guess Chess you will be able to follow the games and play at the same time in our move prediction competitions, all for free and with cash prizes!

Each round we will open a game with $255 in prizes. All you have to do is register, take a look at the rules, join the game in question when it is announced in “Play” and you’re in. This game is only for people over 18 years old.

On how to play, we’ll help you with this basic guide:

Before starting the game, pick a result. If you guess right, it will give you valuable points at the end. During the game you can change the choice, but the extra points counter (the number in blue) will be reset.

You can predict single moves or sequences, even before the game starts. To do this, simply make the chosen moves on the board and hit Send.

If you fail a move, 50 points will be deducted. If you guess right, you will add as many points as seconds the GM has thought, with a minimum of 100 points. Some moves have bonuses.

Sequences award much more points, but watch out! The failures will cost you valuable points in the ranking. As you hit the moves in the sequence, the cost of points in case of failure is lower, but to get the great reward you need to hit all the moves in the prediction.

You can change a submitted prediction before it is played. In the case of sequences, once the first move has been played, it can no longer be changed.

You can get advice from the engines, there is nothing wrong with that.

You can “pass” whenever you feel like it, it won’t cost you any points.

Guess Chess is an excellent form of training. Almost without realizing it you will be immersed in the analysis of the same options that a GM of the highest level is considering.

Our debut at the recent FIDE World Championship in Dubai was more convulsive than we would have liked, but it was very useful to improve our game.

On the one hand, because we realized that it is not enough that everything works well, but that you also have to be prepared for the unexpected.

Guess Chess requires the feed of the moves and the clock times of the players, of course. FIDE has been doing almost everything right for a while now, but made quite a few mistakes on that broadcast. What caused dysfunctions in our system in almost all games. We even had to suspend the sixth because the result was a draw in move 2 (caprices of fate, it turned out to be the first of the match that did not end in a draw and the longest in the history of the World Championships). We have taken steps to minimize the effect of such unforeseen events.

The second type of adjustments comes from the contributions we received from the group of players who played the games, which encouraged us to introduce several changes that are now ready to be applied. The most notable is the introduction of a field where the final result of the game will be predicted and that will have its own stream of points, which will be added to the main one at the end. You can change your mind during the game, but the sooner the correct outcome is predicted, the more points you will earn. At the start, the most unlikely results bring more points.

There are other changes that you can see for yourself when playing the games, we remember that it is still free, open to everyone and in each game we will distribute $ 496.

FIDE Chess rapid is played at 15 ‘per player + 10’ ‘per move. While Guess Chess was conceived with classical chess in mind, we believe that even at this speed it can be fun. Not in blitz, which would be too much. In rapid, some moves will be very difficult to predict because they will move very fast, but for that reason they would also award few points, and as in case of failure the penalty is still 50 points, it is worth not giving them too much importance and focus on predicting when the players think more and about the final result of the game.

We believe we are prepared for everything to work properly, but we take this 3-day tournament as a second general test. The first big event at Guess Chess, if all goes normal, will be the Tata Steel / Wijk aan Zee from January 14 to 30, 2022.

All users can now register for the first game of the FIDE World Championship, which will also feature $496 in prize money for the top five finishers.

The world’s premier chess event is just around the corner. Ian Nepomniachtchi (White) and Magnus Carlsen (Black) will sit down on both sides of the board at 13:30 CET on 26 November for the first exciting game.

With the start of the FIDE World Championship, Guess Chess also begins its official run with the first prize game. The top five finishers will share $496, with $256 going to the top scorer of their predictions.

If you want to take part in the game and try to test your predictive skills against two grandmasters, all you have to do is create an account on Guess Chess and sign up for the game under “Play”. It’s completely free!

Also, don’t forget that we have a general leaderboard for the whole World Championship, where users will add up the best five scores of all the games in which they have made at least one prediction. For more details on how it works, click here.

We are almost there. May the best win! Challenger Ian Nepomniachtchi will have the advantage of the first move when the FIDE World Championship begins on November 26th. Champion Magnus Carlsen had the right to choose first – by puncturing one of two large gold balloons at the opening ceremony in the Dubai Opera – and the crisp *pop* revealed a shower of black confetti, awarding the white pieces to the challenger.

This ceremony was one of few words, after a lengthy Q&A session with the press earlier in the day, where the combatants traded subtle digs and respectful compliments, as well as addressing a few complex questions.

Both players agreed that even the proliferation of online blitz games flooding their databases could and should be examined in case they provided some inspiration for new ideas to add to their opening arsenal, and both were in total accord about the best advice for aspiring champions.

Ian: “I’ll just try to say that you’ve got to enjoy what you’re doing, and you should just enjoy what you do if it’s chess or science or sports or basically whatever.”

Magnus: “Enjoy what you do! If you’re going to excel in a field, I think, at least my philosophy is, that that has to be the main component.”

One question has become more topical now that the draw for colours has been completed, and that is whether the players would prefer to begin the duel with white or black. Nepomniachtchi had joked about this, saying that he would only prefer not to have 14 blacks and that ‘hopefully the rules are strict so it will be more or less balanced’.

Magnus was more serious, and confessed that he probably slightly preferred to start with white for psychological reasons but didn’t feel it made a significant difference.

In recent 12-game title matches, keeping any possible impacts of colour sequence to a minimum has meant that the alternation was switched mid-way, so that the person starting with white also ended with white, and the other player received two whites in a row in the middle. This year, with a 14-game match and an odd-numbered mid-point, the colours will simply alternate throughout.

Today, the final day of rest or preparation before battle, the players or their representatives should be inspecting the venue for those finicky but extremely important details such as the comfort and settings of their chairs, the lighting, noise levels. If not for the historic pioneering complaining of Bobby Fischer, these vital ingredients of optimal concentration would not be part of the pre-match organizational ritual.

And then, preparations should be complete, and the players ready to enter the ring.

Absolutely! GuessChess matches can be played for free from everywhere.

Of course. Chess Engines calculate the best possible moves according to the state of play, however Grandmasters can often opt for a different strategy. Use of Chess Engines therefore does not impact the smooth running of GuessChess.

Yes. When you have made a prediction, the “Delete” button will become available for you to rescind your bet. Bear in mind, though, that the Master may make their move during the short time it takes your action to reach our servers.

Yep, no biggie. At GuessChess, you can play as many simultaneous games as you see fit. However, for the moment you can only register once per game.

No. Points are calculated by taking into account the time it takes each player in the game to make the move. Whether they make the move one second after your prediction, or one minute, the points you win will be the same.

To preserve the integrity of the competition, GuessChess will sometimes implement a time delay between the player submitting the move and the move being made official. This is to prevent players who, for example, are watching the game in person from gaining an advantage.